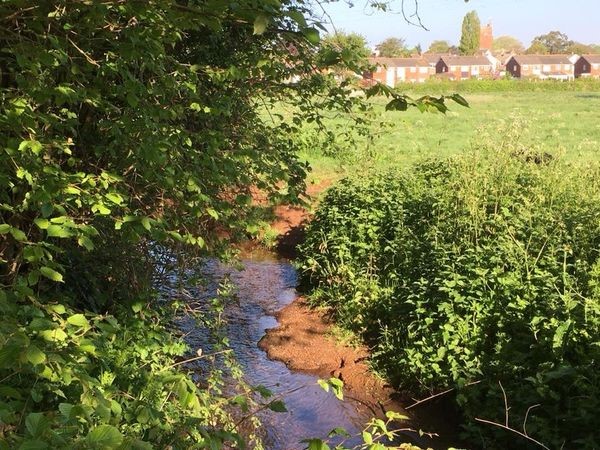 The Parish of Exminster in South Devon, just a few miles from the bustling and growing City of Exeter, has a population of approximately 4000. While the village has grown rapidly in the last 50 years, it has retained some invaluable green spaces and, within these and all around us, a rich diversity of animals and plants continue to find a home. Fortunately, a group of Exminster residents lend a helping hand in making the village a better place for wildlife and nature. Many take a keen interest in the nature on our doorstep; others would like to know more. Following is a brief introduction to some of the highlights, records and observations collected in recent years.

This is on overview and in no way a systematic study. There is an ongoing opportunity to build on this and, over time, develop a better understanding of the nature around us.

We are lucky to have a number of key green spaces that provide a sanctuary and home for many plants and animals. These also offer a source of well-being and the opportunity for those living here to step out into a more natural space and connect with nature. 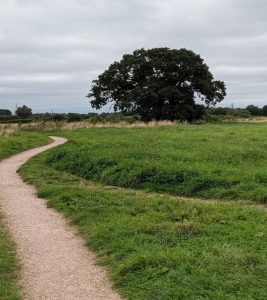 An extensive area of over 3 hectares of lowland meadow with extensive semi-natural grass coverage and varying degrees of wetness. It is home to two mature Oaks and, in recent years, has been enhanced by a Devon Bank, with native hedge plants and management to enhance wildflower establishment. Over 34 flowering plants have been recorded along the hedge bank in the meadow. 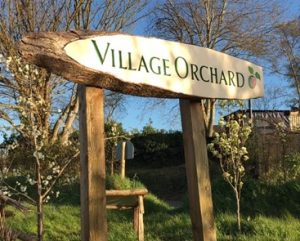 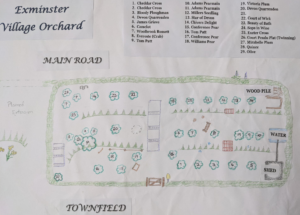 Over the last 6 years a small community orchard has been established at the end of Townfield. It now is home to over 35 fruit trees, mostly apple but also pear, plum, quince and even an olive tree. The main hedge has been laid and the site also has a reptile refuge.

Together, made up of over 1.5 Hectares of grassland with the majority managed as amenity grass, the area includes a collection of matures trees including Pine, Sycamore and Lime. The area has been enhanced with recent additions of cherry trees, a Hornbeam and a Copper Beech. 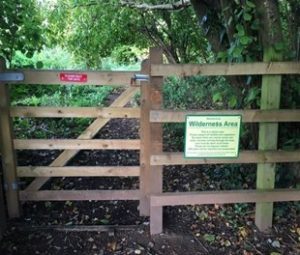 A relatively small but special area set aside for nature, with a very stately Oak and a mix of coppiced Hazel and Holly. It runs along the bank of the Berry Brook . 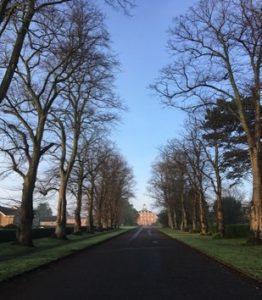 A majestic avenue of mature Lime Trees (Tilia) line Hospital Drive from the Lodges on the Main road up to Devington Park. There are around 40 specimens of this native European tree, sometimes called Linden trees. ‘Linden’ can mean made of Lime wood. They have nectar rich flowers and are a good supply for honey bees in Spring. Their fine gained timber is prized by woodcarvers for intricate carving – the Exeter Woodcarvers might have an eye open for future supplies!

At the Devington Park end of the Lime tree avenue is a large semi-evergreen tree which we think is a Lucombe Oak.  William Lucombe established a nursery in St Thomas, near Alphington Road around 1720 and gave his name to a hybrid tree – thought to be a cross between the Southern European species of Turkey Oak and Cork Oak. The leaves of the Lucombe Oak have sharper points to the edges of the leaves compared with our native Oak. They have a shiny dark green colour above and a whiteish, downey underside.  Given the local connection, examples are found quite widely around the Exeter area – some fine ones in Killerton Gardens. 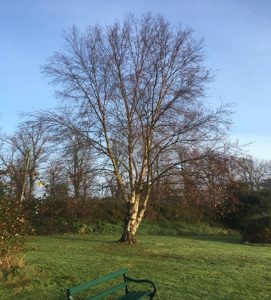 One of the more easily identified native trees is the Silver Birch or ‘Betula Pendula’.  The one pictured here is near the Bowling Green off Reddaway Drive. It’s a smaller tree with a light canopy so a good tree for a garden if you have the space. There are lots more ornamental varieties with dramatic white bark. There are further examples in Deepway Park, by the entrance to Pottles Close and a small copse planted by the Green Spaces Group in a corner of Crockwells meadow. The bark of birch trees is rich in resin and has been used to make a waterproof glue or used to start a camp fire as it burns well.

Not surprising for a churchyard, you can find a Yew Tree (Taxus Baccata) in residence among the gravestones. Yews are, since the mists of time, associated with churches and death. Many ancient churches have Yews in the graveyard. They are known to be one of the longest surviving of our native trees and can live up to a thousand years or more – though ours appears to be a comparative baby. They’re great for thick nesting habitat for small birds and many creatures enjoy their fruits. Historically the wood was known for making longbows and would have played its part in the victory at Agincourt.

As you walk along the village main road past the primary school playground, you’ll notice three or four majestic, airy, mature trees with pale bark. The foliage has very distinctive small leaves with white downy undersides. These are White Poplar Trees (Populus Alba), sometimes called the Silver Poplar. Originally a native of North Africa and Southern Europe, they have grown in Britain for many years. The Romans associated the tree with Hercules and when making sacrifices to Hercules , were known to wear a crown of White Poplar.

Who has noticed the majestic Sycamore tree, standing guard by the village tennis court? The Sycamore (Acer Pseudoplatanus) is a member of the maple family of trees – not a native but naturalised in Britain probably from c1500. It seeds, with its familiar spinning blades, very freely and, as a species, is great for insects as it produces copious amounts of nectar and pollen. They can grow to over 100 feet tall if given space. Sycamore wood with its fine grain has been traditionally used for furniture, musical instruments and kitchen utensils.

When looking across the village skyline from almost any vantage point you’ll be able to pick out one of the tallest trees we have. In a central position in Dryfield stands a majestic Lombardy Poplar. It is a cultivar of the Black Poplar and as the name suggests, a variety originating in Italy – Populus Nigra ‘Italica’. The branches tend to grow in an upright fashion – a habit described as ‘fastigiate’. You quite often see these trees grown in straight rows as a windbreak. Perhaps not one for a small back garden! 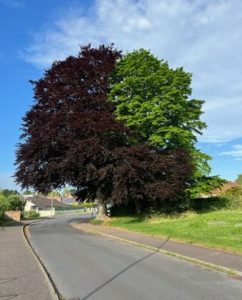 Looking down Dryfield from the Victory Hall in summer, you’d be forgiven for thinking there is an odd tree, green on one side, purple on the other. Here you’ll find a pair of Beech trees (Fagus Sylvatica), one the more usual green leafed variety, the other the purple leafed Copper Beech. The Copper Beech first derived from a mutation found in Germany in the 17th century. They can grow for 200 years of more and have often been used in furniture making. The nuts are slightly toxic, but in the past have been pressed to extract an oil used in oil lamps.

There are few more familiar trees than the Holly (Ilex Aquifolium), woven through our culture and traditions, especially in Mid Winter. More recently, it was used as the wood for Harry Potter’s wand. There are Hollies at various points around the village. A particularly good spot is along the steps that climb up to Deepway from Days Pottles Lane where they form a dark moody tunnel. There is a natural variation in plants between male and female trees – some you’ll find with leaves without the more common prickles. The wood is really dense as you’ll find if you ever try to cut or saw into it.

There are a few Pine Trees found around the village outskirts. A nice example is in Miller Way and others in the grounds around the New School. Younger plants have been planted in some of the new estates like Milbury Reach. There are many varieties of Pine and, for me at least, quite tricky to identify.  The larger trees found around the village are more likely to be Scots Pine (Pinus Sylvestris). This is the only Pine native to Northern Europe and while it became extinct around 300-400 years ago in England in its natural wild state, it has been re-introduced for commercial timber and as ornamental trees.

On a smaller scale, a fascinating world can be discovered in bees in Exminster. Some of those spotted and captured on camera include… 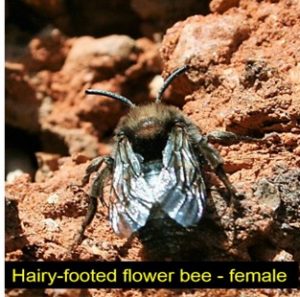 …the Hairy-footed Flower Bee (no, it’s not a wind-up!) They are active in Exminster in May. They often nest in cob walls such as the one at St Martin’s Church. A good time to visit would be on a sunny morning, but please respect the bees and the churchyard. Also to be seen may be black bees with white spots – a variety of Cuckoo Bee which lays its eggs in the nests of Hairy-footed Flower Bees, if it can.

If you have Foxgloves in your garden or nearby, check out the tube-like flowers and see who is in them. Amongst other bees hard at work in Exminster are these which we think are Common Carder Bumblebees. 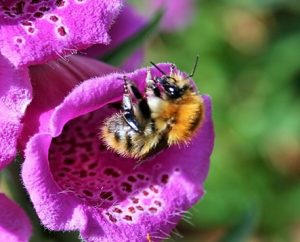 Dragonflies often zip around – some no doubt drifting up from the marshes, but also some benefiting from garden ponds. Our gardens are an invaluable source of habitat for a host of insects and other invertebrates. These are Golden Ringed and Scarce Chaser Dragonflies from Exminster gardens. 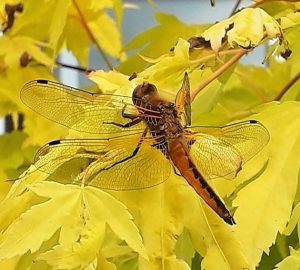 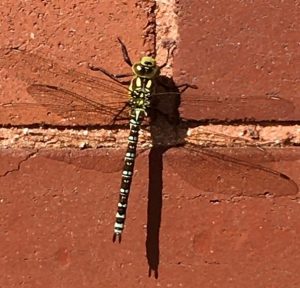 In recent years over 10 species of bat have been recorded across the parish. It is hoped that we’ll build a more complete picture with new surveys over time but, it seems there are some real hotspots around the village, especially in Devington Park and Milbury Lane – probably associated with a combination of older buildings and high mature trees offering sites for roosting, hibernation and feeding. 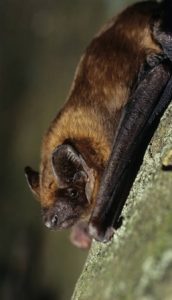 Based on the few surveys that have been done, Common Pipistrelles appear to be the most common. Over just 2 nights in Old Quarry Drive, a detector picked up over 1200 records of ‘pips’. Another species picked up in more than one survey has been the Noctule bat. This is our largest bat, with a wingspan of 30-40cm and tends to roost in mature trees, flying high over the canopy to hunt insects. 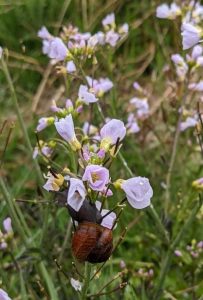 There is an enormous range of native wildflowers across the village. The mix and densities will of course match the prevailing conditions and other things like frequency of mowing. Basic lists of species have been compiled in recent years for Crockwells meadow and bank, the community orchard, the Wilderness and the Bowling Green. 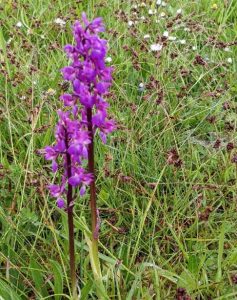 Here is an example for Crockwells meadow. 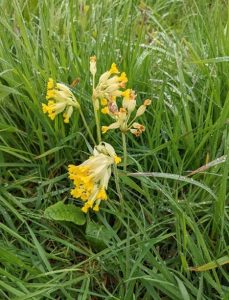 Some striking displays of wildflowers can be found in particular spots. The north entrance to the village, in particular, boasts a carpet of Primroses in April, followed by a mass of Ox- eye daisies in May – providing a lift to the spirits on entering Exminster. 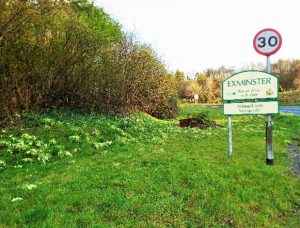 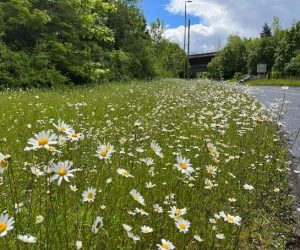 When it comes to birdlife in Exminster, we would probably think first about the RSPB managed reserve covering Exminster and Powderham Marshes. This is part of an internationally recognised site, given the populations of waders, ducks and geese that migrate here over winter. When looking at the core village, the species around us reflect a more typical collection of garden birds. Other things to look out for though include;

From Spring – swooping House Martins, fresh from their epic journey from Africa, here to nest and bring up young before the long journey back south. They build mud nests under the eaves. 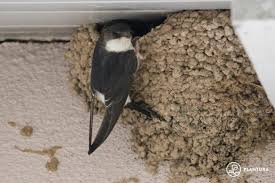 Just along the road, opposite the BP garage is a long-standing rookery. A real community of birds which, over many generations, have made their home here during the day, dispersing across the marshes and beyond to feed.

Just at the top of Exminster Hill – near the Golf Course, you’ll enjoy the soaring calls of Skylarks and, higher still, the haunting cry of Buzzards during spring and summer. Always worth a wander to wonder at these natural marvels. 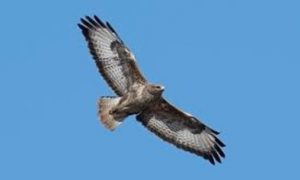